On Thursday, March 4, DRB, PhD., will join the exhibiting artists of Coveted as moderator for a panel discussion. During this panel discussion, we explore themes of love, relationships, and desires from the perspective of the other, which is not readily accessible in mainstream media. This free virtual event is in partnership with Kaiser Studios Inc. in an effort to facilitate interdisciplinary conversations with artists about pertinent topics of our times.

Kaiser Gallery's exhibition Coveted features works that offer a range of perspectives that are not easily accessible in mainstream culture. While representations of the male gaze can be found in abundance when exploring themes of love, relationships, and desires, these artists offer another narrative.

Artist, performer, writer, teacher, homesteader, yoga leader, parent, and gender-queer feminist, DRB--as they are known to students (who range in age from six to 85), is based in Cleveland, OH, USA.

DRB received their Ph.D. in History from Case Western Reserve University. Their research is centered on gender, race, sexuality, and popular culture in the post-World War II US. They are co-editor of Make Your Own History: Documenting Feminist Activism in the 21st Century (Litwin Books, 2011) and co-writer of A History of Popular Culture: More of everything, faster and brighter (Routledge, 2012).

DRB is currently writing an illustrated historical-memoir titled ugly+white+queer: the deconstructing daughter with collaborators artist Liz Maugans and poet-performer Kisha Nicole Foster. The work includes a preface-poem by Foster, incendiary illustrations by Maugans, and narrative and collages by DRB. Part memoir, part historical fiction, the book explores the complex intersections of gender, whiteness, generation, and queer identity, as they evolve and unravel in the life and family of a privileged “daughter.” Written as an ode to Simone de Beauvoir (Memoirs of a Dutiful Daughter), Virginie Despentes (King Kong Theory), Kathy Acker (Blood and Guts in High School), and William Burroughs (Queer), the narrative seeks Truth and honesty amid the grief and reconcilation that come after the L’epoque orange (1), and the hatred wrought on Black and brown, queer, female bodies and psyches over the last four to four hundred years.

​DRB is an independent consultant on Diversity, Equity, and Inclusion, and has been using these lenses in art/writing/curatorial projects for 25 years in Cleveland and around the world. An artist-curator-critic for as long as they can remember, their endeavors often address surveillance, access, power, and authority, particularly as they intersect with racial, sex, and gender. Beginning in the late 1990s as co-founder of newsense enterprises/gallery, DRB and their former partner traveled the U.S. “closing” public sculptures. Donning the authority of the uniformed worker, and our white skin privilege, we installed orange safety cones, “caution” tape, and signs stating “This sculpture is temporarily closed.” This series was also about language, as “closed” is arbitrary when the artwork is visible, yet the warning-yellow tape kept people at bay. In Cleveland, Claus Oldenburg’s Free Stamp remained closed for six months; when someone inquired as to when it would open again, several City office workers reported that it “They closed it for cleaning.” The culmination of this work was a site-specific sculpture closing workshop at the former SPACES building, titled They (again, language play was at work here; the Kafka-esque inscrutability of who “they” might be. We also closed Ant Farm’s “Cadillac Ranch” in Amarillo, TX. This iconic work did not remain closed for long, the Texas winds ripped through the caution tape, and law-abiding Texans do not like outsiders “Messing with” their public sculptures.

​This work set the course for DRB’s subversion of public spaces and events. In 2019, they collaborated with Olga Chwa to perform “DRB’s Feminist Accountability Services, Inc.” Donning green coveralls, their date (Chwa) in a floral print party dress and boa, looking fabulous, both wearing gorilla masks (in an obvious nod to the Guerilla Girls). They entered the “stage” of Ingenuity Fest 2019 and conducted feminist accountability inspections of installations and programs. Discussions awkwardly ensued through the masks, and our spectacle culminated in group discussion over beer and popcorn at a picnic table, masks off.

DRB makes music with Fetus Envy bandmate and life partner, Steve Stanasezk, and  is working on a performance, “Unmoored (Undue L’orange),” a performance about bodies and psyches under siege during and after the hate of L’Orange’s “presidency” spurred on and unveiled.

An urban farmer, homesteader, animal rights supporter, and student of permaculture, DRB hopes to include these interests, as well as those learned in the Larchmere neighborhood to the programs my Sister-collaborators and they create, heal, and unite with the support of the Urgent Artist Grant. Larchmere is a community of unity and grit and my friends-family living and working there saved DRB from despair during COVID and long before. 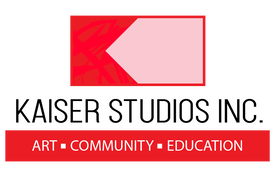 On December 17, Electrical and Railway Systems Engineer Cara Levy, P.E. joined the exhibiting artists of SWITCH for a Panel Discussion that explores the rapidly evolving relationship between art and technology. This free virtual event was in partnership with the Institute of Electrical and Electronics Engineers (IEEE), Women in Engineering New York to promote interdisciplinary conversations between the arts and sciences.

​Kaiser Gallery's exhibition ​SWITCH explores the evolution of art and how it's become more intertwined with technology, reshaping the definition of what we consider art along the way. SWITCH features a wide variety of artists and creators who challenge art in different directions through the implementation of technology.
Panelist Bios

Laura Bigger
Laura Bigger is an Assistant Professor of Art and runs the printmaking area at Truman State University in Kirksville, MO. She has previously taught at the University of Nevada, Reno and Augsburg College, in Minneapolis, MN. Originally from Boulder, CO, Bigger received a BA in Studio Art and Hispanic Studies from Colorado College in 2008 and an MFA in Printmaking from the University of Minnesota, Twin Cities in 2013. She has exhibited her work in solo and group exhibitions nationally.

Emily Dzieweczynski
Emily is a multimedia artist, creative researcher, designer, and educator. She is interested in the intersection of science and art, particularly where they meet at the concept of empathy. Emily is a graduate from Gustavus Adolphus College, holding Bachelor’s degrees in Studio Art and Psychological Science, and studied Fine Arts Media at the Slade School of Fine Art. Her work takes the form of drawing, printmaking, writing, and new media; including code, virtual reality, 3D modeling, web-based media, sound, and video.

Emily’s work has been shown at venues such as the Target Gallery, the American Swedish Institute, Rosalux Gallery, Highpoint Center for Printmaking, Gustavus Adolphus College, and the Children’s Museum of Minnesota. She has received funding through the National Science Foundation, an Arts and Cultural Heritage Grant, the Prairie Lakes Regional Arts Council, and Gustavus Adolphus College.

Haumed Rahmani
Straddling creative, scientific, and digital frameworks, Haumed Rahmani spends his time thinking about questions that lead to better questions, in hopes of finding a guiding compass through the future. His code is being used by the likes of Cornell University, Johns Hopkins University, and the Max Planck Institute, and he’s slated to present at the International Liquid Crystal Conference 2022. With work ranging from microscope imaging to generative weaving and short film, Haumed is foremost a toolbuilder and communicator. He is currently working toward his PhD in Chemical Physics at the Advanced Materials & Liquid Crystal Institute at Kent State University.

At age 18, Santarpia had a spinal fusion of his L5, S1 vertebrae, altering his bodily reality. Because of this, he has grown to be intensely attentive to his bodily sensations. The lived experience and physical consequences of this procedure have since informed his life and art practice greatly. The two main components from which Santarpia’s practice manifest are (1) material approach and process, and (2) conceptual and biographical context. Both his material approach and the spinal fusion surgery he underwent, rely on systems of collaborative creativity (autopoiesis/sympoiesis). The fusion surgery uses bone graft, which is essentially a glue that hardens or fuses into bone over time. The procedure sets a rigid ground using rods and screws along and into the vertebrae for bodily regeneration to take its course. Similarly, Santarpia’s art practice facilitates a system of interaction: the flow of liquids and sediments; gravitational forces; evaporation; crystallization; state changes of liquids, gasses, and solids; UV light; emulsification; muscle contraction; respiration; cognition.

Sunday, November 8, 2020
Explore storytelling and collage-making in a supportive and communal space with artist and educator Morgan Bukovec. 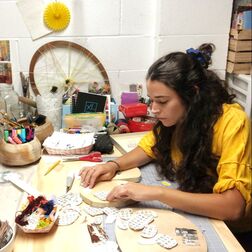 Workshop description:
As a small group, we will explore storytelling and collage making in a supportive and communal space. In this workshop, participants will be guided through reflection, writing, and collage making. This workshop is focused on exploring shape, color, and texture as it relates to expressing a story about the home. We will not only be making and creating together but building a sense of community and connection.

The workshop is hosted off-site at the BAYarts Center. All materials are provided. Space is limited to 8 participants. Registration and entry fee required.
Morgan Bukovec is a mixed media maker, educator, storyteller and collector of things from Cleveland, Ohio. Having recently received a bachelor's degree in Fine Art and Art Education from the University of Dayton, her studio practice is interdisciplinary with a focus on the themes: identity, storytelling, fleeting moments and objects across time. Recent group exhibitions include: Waterloo Arts Juried Exhibition and Intern Exhibition at Spaces Gallery in Cleveland, Ohio, We Want As Much, Politits Art Coalition, and Finding Calm While We Wait, Doug + Laurie Kanyer Art Collection. Morgan works at the Museum of Contemporary Art Cleveland as a Thoma Engagement Guide Apprentice and part-time educator, while creating narrative-based art work in her home studio. Morgan finds joy in storytelling, learning, and collecting ephemeral things.