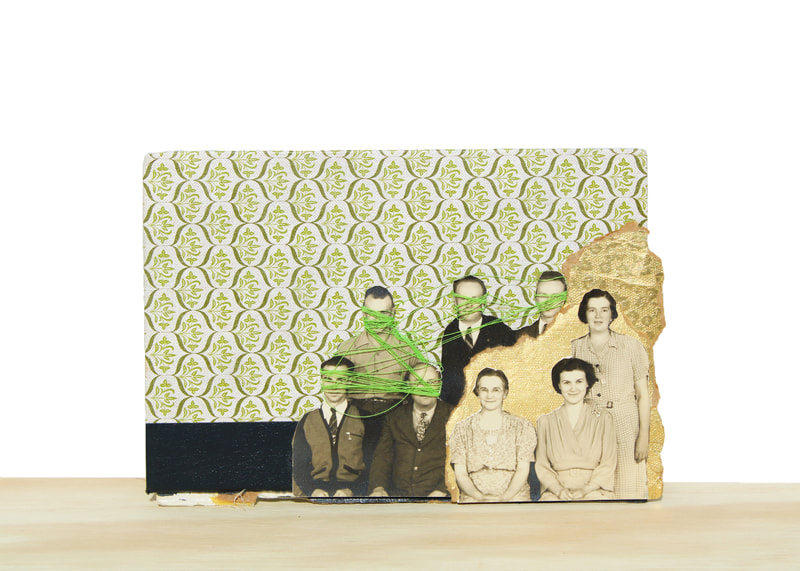 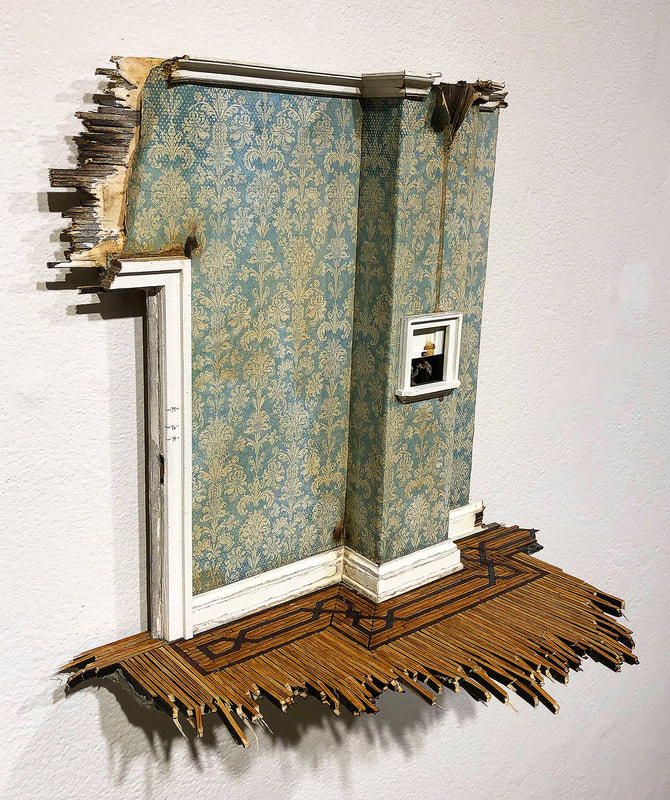 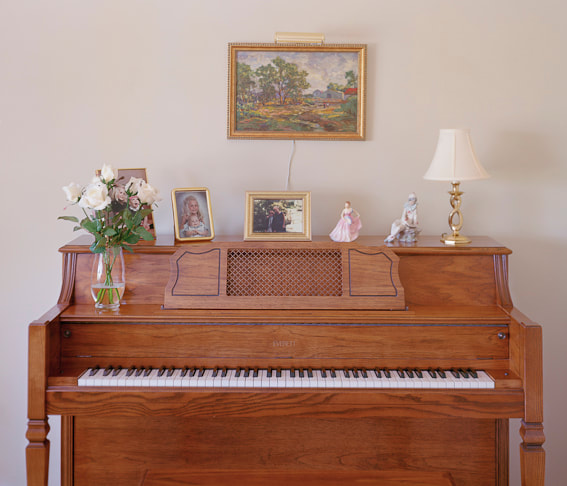 The home is a place that fosters our understanding of relationships. During the early years of childhood is when we develop socially and emotionally. Later in life, these early years will impact our ability to foster relationships, empathize, and how to interact with others. When revisiting memories of home, it is important to teeter on the edge of both joy and trauma as this duality defines us. There are nurturing memories that offer safety and warmth. However, for others, the home can represent pain where a moment of trauma is forever encased in time. Home can be a physical location, associated with the material, or defined within one's self.  This cultivation of objects and relationships defines who we are.

“common thread”
This site-specific installation investigates the relationship of materials and memory in the domestic spaces we call home. Domestic fabrics (quilts, blankets, sheets, linens, etc.) activate stories and cultivate feelings of connection through generations. The found fabrics, suspended from the ceiling, respond to the architecture of the space and create a feeling of openness that draws in a delicate and airy quality. The fabrics are draped physically close and are connected through seamless ties that cultivate the feeling of intimacy, while the various textures and patterns of these fabrics evoke a sense of familiarity. Collected stories, submitted by strangers and the owners of the work’s fabrics, have been catalogued by a storyteller, the recordings are available via a phone number provided in the gallery. The intent of this work is to invite viewers to slow down, look closely at the materials, listen to the stories of strangers, and cultivate their own meaning and narrative through reflection, imagination, and memory. Viewers will have an opportunity to submit their own stories connected to domestic fabrics and memory.
collage works
This series of mixed media collage works are driven by my desire to understand and contextualize the experience of living female through material, content, and process. The long, narrative titles of each work aim to spark a story, while exploring and questioning the roles and relationships within the domestic space. These works are filled with opportunities for viewers to investigate the materials used, examine the story that was delicately created, then reflect on one’s own role and identity within the domestic space.
Morgan Bukovec is a mixed media artist, educator, storyteller and collector of things from Cleveland, Ohio. Having received a bachelor's degree in Fine Art and Art Education from the University of Dayton, her studio practice is interdisciplinary with a focus on themes of identity, storytelling, fleeting moments and objects across time. Recent group exhibitions include: /DIFFERENT STROKES/, Female Artist Club, Belgium, Boundaries, Woman Made Gallery, Chicago, Illinois, and Waterloo Arts Juried Exhibition, Waterloo Art Gallery, Cleveland, Ohio. Morgan works as a bartender at the local pub, a server at her grandpa’s butcher shop, as well as a Thoma Engagement Guide Apprentice at the Museum of Contemporary Art Cleveland.

My approach to the concept of Home is to document the unheimlich or un-homely. This contrarian position has been gleaned from numerous experiences in which the safety, security, and intimacy normally associated with the concept of home has been subverted or dismantled (often by intangible forces), yielding spaces which are mere remnants of their once vigorous nature. Growing up at the end of the Cold War in suburban New York State in a Catholic family- my childhood was generally happy but always laced with a sense of existential dread from invisible sources ranging from spiritual retribution to literal annihilation by radioactive cloud. The resulting effect of this struggle between security/ insecurity has impacted my thinking, research, and practice to yield a permanent sense of what scholar Ruth Ronen describes as an ‘aesthetics of anxiety’. These four works comprise the first part in a series of eight which depict related wall sections of an old domestic space that have been ruptured by some unknown trauma. This trauma is perhaps hinted at in the acronym titles which refer to a Catholic nighttime prayer recited often in my childhood: *'(NILM) Now I Lay Me...... (DTS) Down To Sleep'…..(IPTL) I Pray The Lord…..(MSTK) My Soul To Keep.’
Gary Sczerbaniewicz​ was born in Upstate NY, received his BFA in Sculpture from Alfred University and his MFA in Sculpture & Installation from the University at Buffalo in 2013. Sczerbaniewicz is a 2016 NYFA fellow in Architecture/ Environmental Structures / Design from the New York Foundation for the Arts. He has exhibited both nationally and internationally and has completed residencies at Yaddo (2017), the Constance Saltonstall Foundation for the Arts (2016), and Sculpture Space (2013). Sczerbaniewicz recently served as Visiting Assistant Professor of Sculpture at the University of Notre Dame. Gary is represented by Anna Kaplan Contemporary, Buffalo, NY.

I'm a person who makes things and loves people. My work deals with what it means to be human, with what it means to be imperfect. I study the imperfection within myself, and I broadcast that into the world so that others may relate and feel closer to me and to one another, as imperfect human beings. I am most interested in communication between humans, and the failure of that communication. What happens when we love too much, and our feelings become warped or perverted? What happens when we want to get close, but we cannot? I deal with emptiness, fullness, lust, love, and abuse. I am interested in happiness, and subsequently images, text, and ideas that are connected to happiness, especially ones that have been deprived of context or emotion. Ultimately, I want to share feelings with people.
Allison Walters is a person who makes art. She works in photography, painting, video, digital art, and conceptual art. Her work deals with being human and sharing complex feelings with others. She has an MFA from Stony Brook University, where she studied Studio Art from 2014–2017. She also works as a web and graphic designer at the College Art Association, a nonprofit arts organization based in New York City.

On June 12, Kaiser Gallery presents SUGAR (Chapter II), a solo exhibition by Derick Whitson. Derick Whitson (b. 1991 Mansfield, Ohio) is an artist currently living and working in NYC. Working primarily in photography and video, Whitson explores the history and relationships of clowning, drag queens and black/white face to explore the social constructs of race, gender, and sexuality.

This is your Ego: Words, two words, made up of two words. I’ve waited on the smell of beef stew and the taste of the burned garlic that sizzles the throat. My throat has held tension, it could be the tightness from allergies or the 3 legged dog pose that has become impossible to comfortably release. I’ve found moments of silence, maybe only two, but the background noise of television, irritates my thoughts on the search for a job that will convert me into a citizen. Theres been no quench of my thirst, theres no physical metaphor or reason to continue slurping orange juice. My belly is bloated, it’s beyond the american cheese and meat lovers pizza. The anxiety holds tight onto the gas that introduces itself to my neighbors. Maybe I waited for this? Waited to find that my true lover is longing and the potential, to make believe and form surrealist dreams that remind me of the bones in my sleeves. I have two treasure chests, one in my pores and the other in the sheets when I allow one sock to go because of a fungus thats beneath one curled toe. I had a dream of painting, navigating color relationships on a canvas. I also dreamed of riding my bicycle down a hill that was so steep I could barely break. Ellen is the name, she’s my divination tarot card reader. I’ve never seen her, I’ve never spoken to her, but she reveals a path. Sometimes I hear my own thoughts like a bell, the bell from the toaster oven that invented itself? Is it really true that I could be a combination of everything and every one else, am I made up of other peoples thoughts. There’s something to the color mint green, the green influences my sickness, almost like a tooth decaying in response to a mint chocolate chip ice cream cone. I’ve loved once before, he was kind, gentle, sweet, the production of him happened in my dreams. I’ve thought about my dreams once before, they told me theres something to the color yellow, they said it’s like a stench in the air that’s only tainted by the sun. Running doesn’t get me high, it only forces me to create a amount of sympathy, sympathy for my insecurities. I’ve seen this chevron pattern once before, it follows the stripes that mask themselves in red & white, but this time in cotton. Cotton has become a symbol, I’m not sure of what, maybe it’s the mucus that drowned itself in my skin. A rose also carries it’s own symbol, and I don’t mean a projected symbol that signifies the artificial lighting from Christmas lights. I’ve learned two things about breathing, only one represents life. Calvin, what a lovely name, is that because it’s attached to my suit case, or my white underwear that rises in my shorts. I’ve found solace in my longing, time in my heart beat, and a tremor in my waken state. Lets hope my ego has found peace also. ​

The Weight of Time

​An exhibition that explores the social and economic effects from government quarantine orders, as a direct result, of the novel virus COVID-19. We invite artists to submit their introspective works that examine the solitude of quarantining during the global pandemic and the shutdown's lasting effects on vulnerable populations. The global pandemic and the shutdowns that followed created new challenges for various people in different ways while further exposing broken government infrastructure and community ramifications for a world that was not prepared to stop. ​

Cut From the Same Cloth

IN PARTNERSHIP WITH THE CLEVELAND INSTITUTE OF ART: CREATIVITY WORKS PROGRAM
​October 16 - November 28, 2021

Cut From the Same Cloth features the mixed media works of Ewuresi Archer and Crystal Miller.

The vibrant works in this series draw directly from the artists' African American and African cultures, offering a dialect and a conversation between the two experiences.

"We come from two different backgrounds and are of the same race. There are a lot of differences and similarities between us as humans but also between our cultures. As a result, the work depicts our hopefulness and pride in our cultures. Rooted in cultural experiences, the hair salon, music, and home life, these experiences bring us together. While this may not be the lifestyle for every black person, we hope, in some way, a connection can be made.

The paintings depict physical spaces that we have been in and or are a place we call home. The textures, patterns, and gem-like motifs represent the continuous black lifestyle. The color combination is used to represent black skin but also celebrate black lives and transform these spaces and demonstrate an experience.